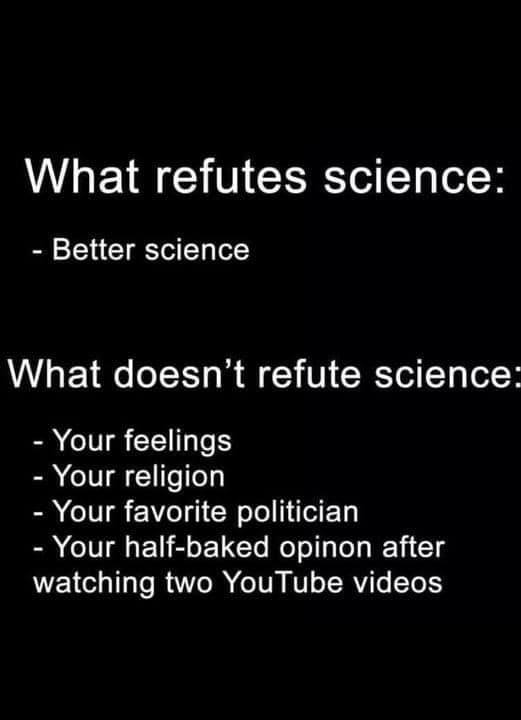 The Meme is A Lie.
Modern cutting-edge science has confirmed the wisdom of the mystic -- wherein, the source of higher reality is is the Unseen Spiritual -- as demonstrated quoting The Scientific Revolution
http://TheLawOfOctaves.com#ScientificRevolution

In the words of Nikola Tesla: “If you want to find the secrets of the universe, think in terms of energy, frequency and vibration.”  Pythagoras, Plato, Jesus, and other mystics did, and modern science has begun to open the door to higher consciousness that has begun to connect them to the Source of all Truth and Knowledge -- i.e., again the words of Tesla: "My brain is only a receiver, in the Universe there is a core from which we obtain knowledge, strength and inspiration.” Quoting from Alchemical Transformation (see  http://Emmanuel.Nazirene.org/fr_francis.htm  ): "When we didn't have to meet down in the secret places, we would use the light coming through the stained glass in the church to tantalize the mind, and when the choir wasn't singing, mystical chants would take their place on our lips. The churches were constructed in a way so that the energies of higher reality were able to be channeled within the structure, and into the people inside, especially to those who were able to open themselves to receiving it. The energies in the air of the churches were at times electric, and they felt energizing. The smells were soothing to the mind, calming it from the worries of the day". Which confirms that statement of Tesla when he stated: “But instinct [Intuitive Insights] is something which transcends knowledge. We have, undoubtedly, certain finer fibers that enable us to perceive truths when logical deduction, or any other willful effort of the brain, is futile.”

This new emerging paradigm of modern science was noted by Robert Jastrow, an astrophysicist who headed the NASA’s Goddard Institute for Space Studies, pointed out that the big bang is not exactly an explanation of cause. He is quoted in The Aquarian Conspiracy: “If a scientist really examines the implications, he would be traumatized. As usual, when the mind is faced with trauma, it reacts by ignoring the implications - in science this is called ‘refusing to speculate’ - or by trivializing the origin of the world by calling it the Big Bang, as if the universe were merely a firecracker”. Mr. Jastrow then continues and states: “Consider the enormousness of the problem: Science has proved that the universe exploded into being at a certain moment. It asks, what cause produced this effect? Who or what put the matter and energy into the universe? Was the universe created out of nothing or was it gathered together out of pre-existing materials? And science cannot answer these questions... It is not a matter of another year, another decade of work, another measurement, or another theory. At this moment it seems as though science will never be able to raise the curtain on the mystery of creation”.
Modern physics has begun a Scientific Revolution -- proving the inadequate foundation upon which the very definition of scientific investigation has been built and is easily proven to be in error. When physicist Walter Thirring stated in his book, Urbausteine der Materie about the nature and reality of physical matter that modern physics*** “...has put our thinking about the essence of matter in a different context. It has taken our gaze from the visible - the particles - to the underlying entity, the field. The presence of matter is merely a disturbance of the perfect state of the field at that place; something accidental, one could almost say, a ‘blemish’. Accordingly, there are no simple laws describing the forces between elementary particles… Order and symmetry must be sought in the underlying field”*** -- what he was confirming is the fact that what man sees with his physical eyes, is an image that has been projected into this world of appearances from an UNSEEN CAUSAL FIELD. But now that the scientist has confirmed the wisdom of the mystic, how does the scientist gain access to the Unseen Source? In the words of Nikola Tesla: Only by the change and transformational frequency and vibration of his own mind and consciousness. The mind of organic man is of an earthly frequency and vibration -- and the reason why the Source is not seen with our physical (earthly) eyes and vision, is because our consciousness is limited to the frequency and vibration of the physical. In the realization of this FACT, the mystic develops his higher spiritual attributes of mind and consciousness that enables him to see and even enter into Spirit.
Which provokes the question: What is being projected? Thus, the statement by astronomer James Jeans: “Today there is a wide measure of agreement… that the stream of knowledge is heading towards a non-mechanical reality; the universe begins to look more like a great thought than like a great machine”; and the statement by astronomer Arthur Eddington: “The stuff of the universe is mind-stuff” -- both demonstrate the reality that there is nothing but Projected Thought. Which means that you are a thought that is being projected in this world by your True-Self that dwells in the reality of an UNSEEN CAUSAL FIELD. In like manner physicist and Nobel prize winner John Archibald Wheeler stated that*** "every item in the physical world has at bottom ...an immaterial source and explanation ...that all things physical are information-theoretic in origin and that this is a participatory universe"***. What this means is that what you see physically, conveys an (allegorical) explanation pertaining to the "...immaterial [UNSEEN] source" that is projecting the physical image of what we see with our physical senses. Max Planck who is considered the founder of quantum theory stated: "As a man who has devoted his whole life to the most clear headed science, to the study of matter, I can tell you as a result of my research about atoms this much: There is no matter as such. All matter originates and exists only by virtue of a force which brings the particle of an atom to vibration and holds this most minute solar system of the atom together. We must assume behind this force the existence of a conscious and intelligent mind. This mind is the matrix of all matter." And more recently, cyberneticist David Foster described ***“an intelligent universe” ***whose apparent concreteness is generated by cosmic data from an unknowable, organized source. The holographic reality says that: “…our brains mathematically construct hard reality by interpreting frequencies from a dimension transcending time and space. The brain is a hologram, interpreting a holographic universe.” And this largely inconceivable reality is confirmed by Einstein in the quotation to the right where is speaks of our physical presence as the manifestation of frequencies -- i.e., "We are slowed down sound and light waves, a walking bundle of frequencies tuned into the cosmos. We are souls dressed up in sacred biochemical garments and our bodies are the instruments through which our souls play their music".